What do you do with your yard waste when landscaping? If you are aware that yard waste can no longer be disposed of along with regular garbage, you’ll know that disposing of the waste can cost more then the job itself.

What major landscaping companies do is have bins placed around the work site that can be easily hauled away when the job is done. Now, you can have the same service. Bins delivered right to your work site that are the right size and perfectly designed for easy top or open-end loading.

Bin service is increasing in popularity because of it’s economic and environmental advantages. Rather than piling up the waste only to have a loader and a truck pick it up and dispose of it later, the waste is put directly into the waste bin where it is quickly picked-up and hauled away later.

Even if you are piling it directly into a truck for later disposal, you are tying up a truck that could otherwise be in service as well as tying up a driver who is being paid by the hour. It it far more efficient to have someone ‘drop-off a bin’ and ‘pick it up later’. In the same time that it takes to load a truck, a truck driver can be servicing others resulting in greater efficiency and reduced costs for all. 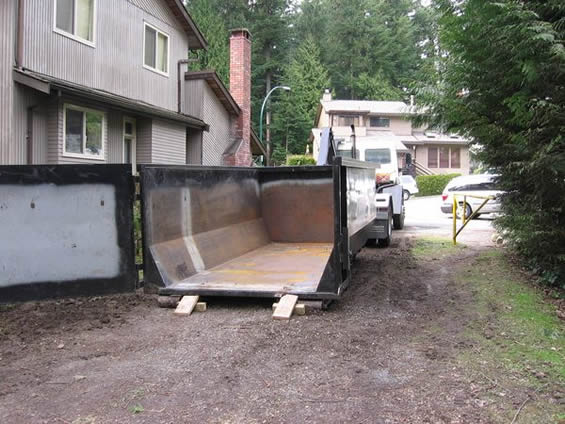 The photo above shows just how easy these bins are to load and unload and how easily these waste disposal bins can be put into places previously considered inaccessible.

“The crew did an incredible job! They were on time, worked very hard all day and were very courteous to myself and our neighbours. We will certainly recommend your company to others.”

“I have used the Burley Boys for years. The work is always done just the way I ask.”

“The guys did a great job. Amazing how they were able to fall all that material without damaging my garden below.”

“I have had the Burley Boys on several occasions and have always been pleased with their work and often recommend them. They are always kind and courteous, qualities that are much appreciated.”

“The “Big Boys of the Tree Business” did an outstanding job. Thank you for your work, your professional approach and knowledge, the clean site etc.”

Great opportunity to tell you how very pleased we are with your employees and service. For estimate and service, were professional, timely, efficient, pleasant, responded appropriately to my one concern. Have used your services in 3 houses over 30 years and will continue to do so. Job well done!

“The crew were most professional and provided a well organized and executed job. I would be pleased to recommend you at any time.”

“Very friendly crew. The work was done very professionally & cleaned up well afterwards. We are very pleased with the results and have already been recommending you to some friends. Thank you.”

“I appreciate Erik & his crew’s level of professionalism. They did a great job and I will be calling in the future. Thank you.”

“I loved Sean. He came to the door to inform us of the plan for the day. Moved our cars etc. He came again at the end. A friendly good-bye. Civil. Thanks.”

“In the 28 yrs we have lived here, Burley Boys does the best work that we have ever experienced.”

“Thank you Burley Boys! Thank you Erik – and a special thanks to Adam and his team who did such a caring and special pruning and clean up! Wonderful work! Good service!”

“I was very impressed with Burley Boys, from initial phone call to end of job. You showed up on time, returned calls promptly and did a great job. Thanks very much.”

“The work was wonderful, as are the men who did the work; friendly and attentive to detail; excellent customer service. Thanks again.”

“We really appreciate the great work Sean’s guys do. We now have more sunlight streaming in and less gutters to clean. Yiipppeeee!”

“The crew was able to remove my pine without damaging all the bushes around it. I just wish I’d been there to see how they did it!”

To see how Burley Boys Tree Service can improve your property, CONTACT US.