This incident occurred in spring 2009 on one of Whistler’s Golf Courses. 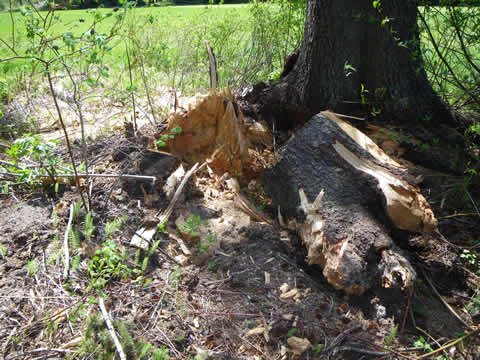 The picture above shows a tree that had collapsed over the winter for no apparent reason. No one had witnessed the tree falling, and no clues were visible indicating the cause. Since the tree was located close to a path, this was of great concern to the owners. Burley Boys Tree Service was called in to investigate.

The cut-off ends indicated that there was nothing obviously wrong with the tree. It appeared to be in good health and from all appearances, shouldn’t have fallen. 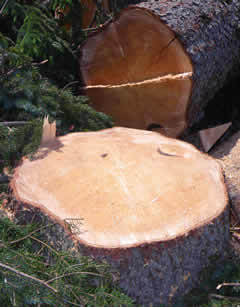 If there was anything wrong with the tree, it had to be in the roots, and to test this theory, an incremental borer (core sampler) was used.

The core sampler is shown in the picture below along with a sample core that was removed.

After testing it was determined that not only the tree that had fallen, but the other trees in it’s immediate vicinity were all suffering from extensive root damage. The roots had rotten away. Since there was no way to repair this damage, in the interest of public safety, the damaged trees had to be removed. 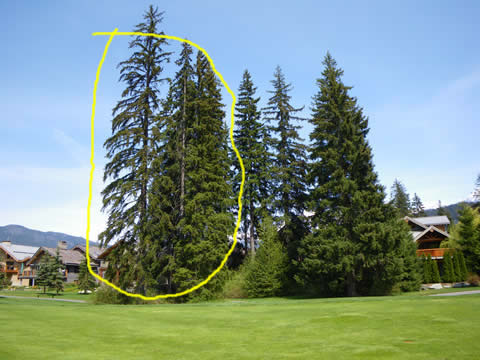 The three trees circled in yellow on the left in the picture above were all suffering from serious root rot and had to be removed.

To find out more about our arborist services, go to Arborist Services.

“The crew did an incredible job! They were on time, worked very hard all day and were very courteous to myself and our neighbours. We will certainly recommend your company to others.”

“I have used the Burley Boys for years. The work is always done just the way I ask.”

“The guys did a great job. Amazing how they were able to fall all that material without damaging my garden below.”

“I have had the Burley Boys on several occasions and have always been pleased with their work and often recommend them. They are always kind and courteous, qualities that are much appreciated.”

“The “Big Boys of the Tree Business” did an outstanding job. Thank you for your work, your professional approach and knowledge, the clean site etc.”

Great opportunity to tell you how very pleased we are with your employees and service. For estimate and service, were professional, timely, efficient, pleasant, responded appropriately to my one concern. Have used your services in 3 houses over 30 years and will continue to do so. Job well done!

“The crew were most professional and provided a well organized and executed job. I would be pleased to recommend you at any time.”

“Very friendly crew. The work was done very professionally & cleaned up well afterwards. We are very pleased with the results and have already been recommending you to some friends. Thank you.”

“I appreciate Erik & his crew’s level of professionalism. They did a great job and I will be calling in the future. Thank you.”

“I loved Sean. He came to the door to inform us of the plan for the day. Moved our cars etc. He came again at the end. A friendly good-bye. Civil. Thanks.”

“In the 28 yrs we have lived here, Burley Boys does the best work that we have ever experienced.”

“Thank you Burley Boys! Thank you Erik – and a special thanks to Adam and his team who did such a caring and special pruning and clean up! Wonderful work! Good service!”

“I was very impressed with Burley Boys, from initial phone call to end of job. You showed up on time, returned calls promptly and did a great job. Thanks very much.”

“The work was wonderful, as are the men who did the work; friendly and attentive to detail; excellent customer service. Thanks again.”

“We really appreciate the great work Sean’s guys do. We now have more sunlight streaming in and less gutters to clean. Yiipppeeee!”

“The crew was able to remove my pine without damaging all the bushes around it. I just wish I’d been there to see how they did it!”

To see how Burley Boys Tree Service can improve your property, CONTACT US.