Sean, long time Burley Boys part-Owner & Arborist, was recently interviewed in the North Shore News to talk tree pruning. The article is definitely worth a read, with Sean providing a wealth of information about proper pruning & tree health. 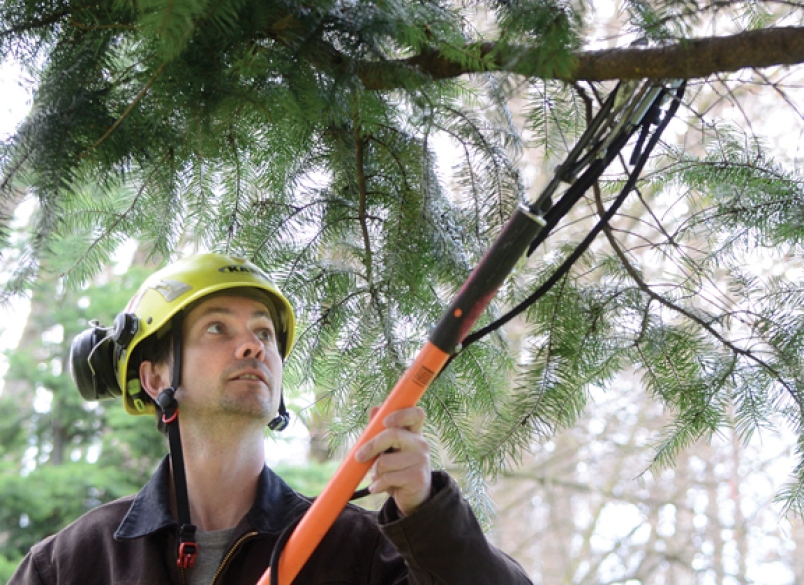 If you’re wondering if your backyard tree is healthy, you might want to cast a glance in the direction of your neighbour’s yard.

Comparing the canopy colour of nearby trees could help highlight problems with your own tree.

“When you compare it to the tree across the street that’s the same species, if it’s bright and lush green and yours is thin and yellowing then that’s an area of concern,” explains arborist Sean Wightman, who is also the manager of Burley Boys Tree Service, which operates on the North Shore.

Sometimes trees that are in decline will have yellowing foliage, notes Wightman.

Other signs of possible tree stress include dead or broken limbs in the tree canopy, leaning, or obvious damage to the trunk, including wounds or decay, he explains. Some trunk wounds seep something that looks like sap, but the wound is actually just collecting water, which can lead to decay.

Not all trees that show these symptoms are damaged beyond repair, however, and Wightman says there are options that can sometimes be taken, such as deep-root fertilizing or improving soil makeup, to help the tree recover.

Unlike flowers and small garden foliage, homeowners do not need to prune their trees. In fact, it is not recommended.

“A lot of the pruning and maintenance work (for trees) is risk-mitigation driven,” explains Wightman.

If tree pruning is necessary, most of the work is done up in the canopy and a skilled technician is required. That type of work is not advised for those who are not trained, says Wightman. He adds that there is some pruning that homeowners can do with smaller trees, but they would need to know what they were doing so as not to damage the tree.

One thing homeowners can do on their own is trimming to reduce snow-loading on hedges. If there is a bunch of snow on a hedge in their yard, homeowners can use a rake to shake it and get the snow off before it gets too heavy.

A lot of hedges fall apart due to snow, says Wightman. Part of the reason for that is because the North Shore doesn’t get a lot of snow so trees don’t develop the wood to structurally support it.

“Trees are very reactionary in how they grow so if they’re getting loaded with snow on a more frequent basis then they develop the wood and the strength to support that,” explains Wightman.

Many homeowners get a risk assessment of their backyard trees done on a regular basis.

“More and more people want to be showing due diligence and at least assessing the risk that their trees present,” says Wightman.

Homeowners should be diligent in looking at their trees and if they appear to be dead or dying or there are any broken limbs or the trees have a heavy lean or any obvious wounds, they should consult with an arborist, says Wightman.

Size and location of trees are important considerations when planning a backyard or landscaping project, he adds.  A lot of times trees are planted right below power lines servicing a house so when they grow, they get too close to the lines.

A lot of trees are planted without realizing how big they are going to get and they end up taking over the yard, says Wightman.

One of the most common tree pruning mistakes people make is topping trees, he adds. Topping refers to cutting off the top of a tree and it happens often after the wrong tree is planted in the wrong place.

“Most reputable arborists won’t want to top trees,” says Wightman. “In general if there’s a case that can be made to top a tree, a stronger case can be made to remove and replace it.”

He explains that when the top of a tree is removed, decay can occur on the trunk at the site of the cut. When a new top grows from that part of the trunk, it can get pretty big and heavy. As the new top is exposed to weather conditions, such as wind, the decay at the previous topping cut can make the new top unstable. Once a tree is topped it must be maintained, usually re-topped, to limit the amount of weight above the decay, explains Wightman. He says he generally advocates removing and replanting trees over poor pruning practices.

For example, if someone wanted a tree reduced in half he would likely advise them to take it down and plant a new tree instead.

“Trees add value to our landscape and to the city we live in and they’re a big part of the North Shore. We’re not out there trying to cut down all the trees, we’re fairly conservative in wanting to retain as many as possible,” says Wightman. But because there is such a long growing season on the North Shore, trees grow quite quickly, he notes.

In general, tree work should be left to the professionals, but homeowners can be diligent in examining their backyard trees for signs of damage or decay.

Burley Boys Tree Service has had a busy 2016 and we want to give back. This…

North Shore News Our boy Stirling is making it big! Read a feature story all…